My brothers son makes 4 living generations of Murphy men. I have known 5 generations, with my great-grandfather Theodore passing in the mid 1990's when I was a child. 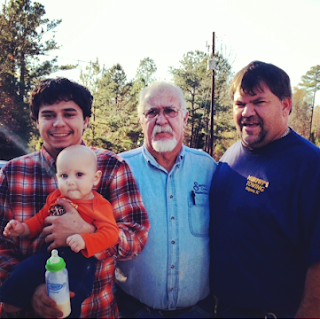 This photo is several years old now, with Hunter having TWO little sisters now. My grandfather has since lost his sight. My father's dark hair has now changed to salt-and-pepper.

Theodore Samuel Murphy married Helen Louise Clack on August 17th 1940. If they would have lived, tomorrow would be their 77th wedding anniversary. My grandfather, "Papa," was the middle child. Even with the deaths of all 3 sisters, who I had never met, he is still the middle child of the living brothers. The oldest, Ronald "Ronnie," was conceived just a month after the marriage of his parents. There was also a set of twin girls, Linda Faye and Sandra Kaye Murphy.