Branching Out: The Branham's Beyond the Grave

In the small town I am from, Branham is a popular surname. It did not surprise me to find some in my family tree. If you ever find yourself driving down the long stretch of Highway 34 outside of Ridgeway headed toward Camden, look for the Smyrna UMC cemetery. The sprawling cemetery is just over the Kershaw County line. The accompanying church was founded over 200 years ago, so the graveyard is filled with the history of nearby families. One hot day in August of this year, I decided to just go peek at what was known as "the old Branham cemetery." I had ran across this name in my research but could not find an address. Asking a few locals, I was pointed to Smyrna UMC cemetery. This is where I found my first bonafide ancestor of the American Civil War

I had started this research many, many years ago - approx. 2001 while in school - and hoped to join a social club known as the Daughters of the Confederacy. I have always been fascinated with history. I don't agree with the ideas of the confederacy, but being from the south it's part of my story and I wanted to learn about it. I was disappointed to not find mine back then, but had much more information on other ancestors - so I quickly forgot about it. But in August, armed with a list of names and dates, I found several matches of tombstones to my ancestors. One in particular caught my eye. 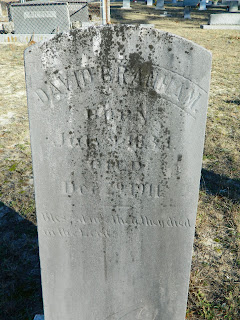 David Wesley Branham was born July 9th 1834 in Kershaw County to Samuel Branham and Lizzie Talbert. He was raised in Kershaw County, and went on to join the Army in 1861 at the start of the Civil War. I came across a newspaper article (below, clipping from an article about living Confederate Veterans in the Winnsboro, S.C. area; in The News and Herald [Winnsboro, S.C.] dated May 25, 1910.) posted by a fellow FindAGrave member. 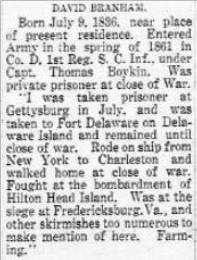 The article reads:
DAVID BRANHAM (Header) Born July 9, 1836, near place of current residence. Entered Army in the spring of 1861 in Co. D. 1st Reg. S. C. Inf., under Capt. Thomas Boykin. Was private prisoner at close of War.
"I was taken prisoner at Gettysburg in July, and was taken to Fort Delaware on Delaware Island and remained until close of war. Rode on ship from New York to Charleston and walked home at close of war. Fought in the bombardment of Hilton Head Island. Was at the siege at Fredericksburg, Va., and either skirmishes too numerous to make mention of here. Farming."

My 3x paternal great grandfather, John E. Murphy, married Louise Branham. Lousie was the daughter of Robert and Mary Branham. Roberty had a brother, named David W. Branham. I think this would make him my... 3x great grandfathers brother in law! LOL
Posted by Unknown at 10:25 AM